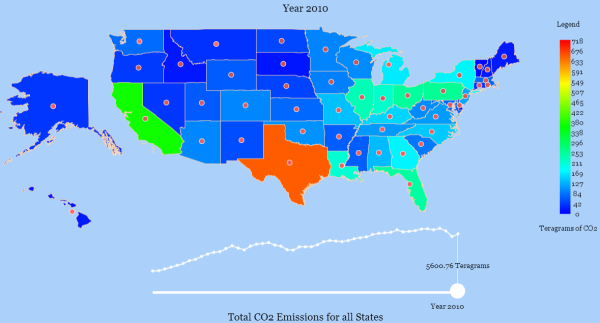 Emissions by state. Click to see the interactive version.

This post is related to NPR’s Planet Money’s podcast “Episode 472: The One-Page Plan To Fix Global Warming“. In the podcast, Alex Blumberg and David Kestenbaum describe their approach to reduce carbon dioxide (CO2) emissions, the chief cause of global warming. Their one step approach is to tax emissions. It’s an interesting podcast, well worth the 20 minutes.

I titled this post “My interactive visualization of CO2 emission data by state”, but an equally suitable name would have been, “Which state would pay the most if CO2 emissions were taxed?” The answer? You don’t really have to read the rest of my blather, you can click through and see the clear “winner” for yourself: Heat Map of CO2 emissions by state, 1960 to 2010.

The infographic is a heat map that shows the Lone Star State Texas is truly alone in CO2 emissions. I’ve added a slider so you can see the historical perspective. The data from this graphic was collected from the government-supported Carbon Dioxide Information Analysis Center (CDIAC).

According to the CDIAC website’s description, the data seems to be entirely composed of fossil-fuel consumption: “The data from which these carbon-emissions estimates were derived are values of fuel consumed: in billions of cubic feet, for natural gas; in millions of barrels, for petroleum products; and in thousands of short tons, for coal.”

One wonders why Texas’ fuel consumption is so high. I sent an email to the CDIAC to find out and received a reply from  TJ Blasing at Oak Ridge National Laboratory (CDIAC is a division of Oak Ridge National Laboratory). The reason Texas is so high compared to the rest of the nation is due to the fact that energy extraction/production generates large amounts of CO2 as a by-product. Those CO2 emissions are charged directly to Texas since that was where the CO2 “dump” occurred.

So I suppose when I asked “Which state would pay the most if CO2 emissions were taxed?” the anwer would really depend on what sort of tax it was. If it’s a consumer tax, the taxes would be much more evenly spread across all states than the visualization shows because Texas consumers use fuels at a similar rate compared to other states.

If the CO2 tax is implemented as a business tax, then my chart would be much more skewed than it shows!

And if it’s some combination of a consumer and business tax, then it would basically be correct.

To tie things up, turning to a global perspective, the US imports a significant amount of fuel from the rest of the world. The production of these fuels makes those other countries’ CO2 emissions very high, although it is the US that is benefiting from consuming these fuels. So this scenario plays out internationally as well as locally.

I swiped the following slide from a presentation at a recent meeting on global CO2 emissions (slide 28) that was forwarded to me by TJ: 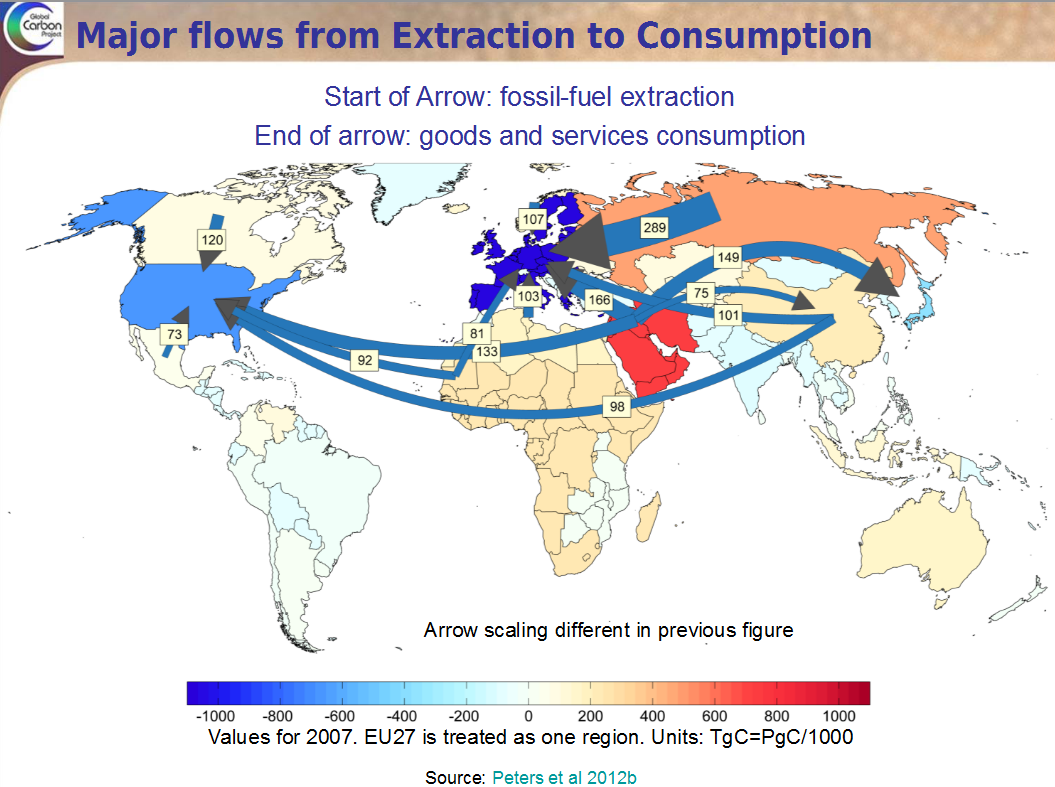 Where fossil fuels are extracted and who uses them. Taken from a presentation from the Global Carbon Project.

Here is the partial text of TJ Blasing’s reply:

We are dealing with emissions where they are produced because we are concerned with the global carbon cycle: a. where does it come from; b. where does it go, and c. what happens on the way from a to b. This is the chemistry and physics side of things, if we put a certain amount of oxidized carbon in the atmosphere, how long will it stay in the atmosphere and how much climate change will that cause?

… The USA “outsources” around 100 teragrams of carbon per year to China, and to many other countries as well. The USA would be charged with much more carbon emissions If we calculated it by where products are actually consumed, rather than where they are produced.

In the USA, at least so far, regulators adjust for this; however in international negotiations, it is important.

Back to the USA; we regulate things like fuel economy of cars and efficiency of power plants rather than taxing states that produce things we all use, like coal and oil. So when you go posting things like our state-by-state emissions, I would … put in the appropriate caveats. The community of geophysicists already knows this stuff, as does EPA and regulators….

“Fossil-fuel carbon emissions by state” would be a correct title. So would “emissions of oxidized carbon from fossil-fuel combustion, by state.” For example, West Virginia burns a lot of coal to make electricity for other states. The carbon from that coal consumption is charged to West Virginia.

Vehicle registrations by state in 2003: https://www.fhwa.dot.gov/policy/ohim/hs03/htm/mv1.htm