Following the suggestion of a reader, I re-plotted the worldwide minimum wage vs. unemployment. Before you skip ahead to the chart below, keep in mind the lesson I learned from my last post which was that international economies are vastly different from America’s, and examining the extremes doesn’t translate easily back to American circumstances.

In the last post, I was surprised to find that there were a slew of countries with a minimum wage that was higher than the average wealth (GDP per capita). All of these countries were very poor and were recipients of foreign aid. I speculated that this foreign aid helped support such high relative minimum wages. So, hopefully, the unemployment numbers would be low. 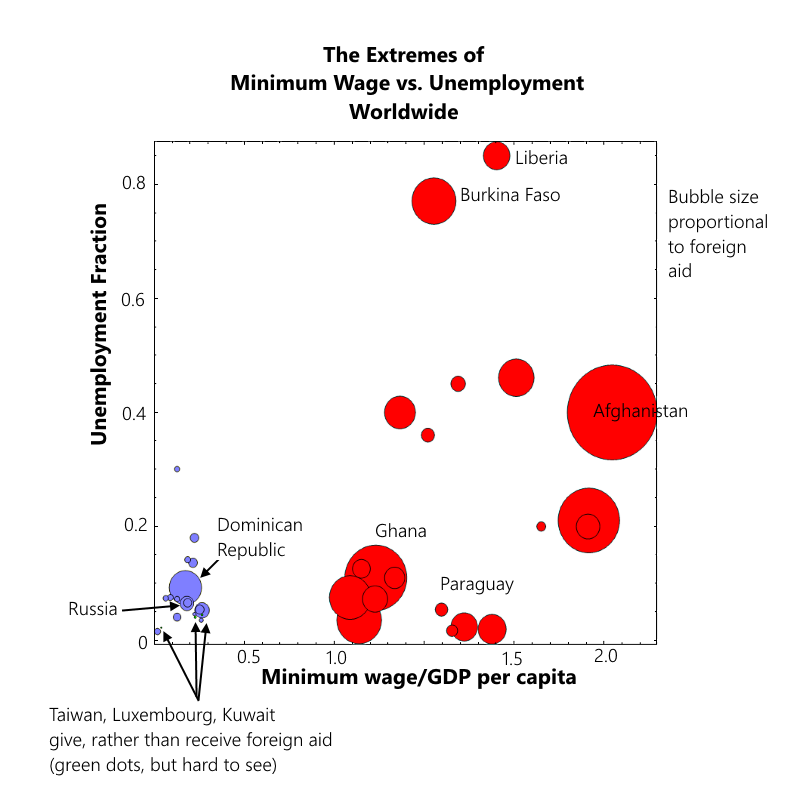 There’s a cluster of countries (Paraguay, Vanatu, Tajikstan and Papua New Guinea) where that appears NOT to be true. Wikipedia articles for these countries showed that the minimum wage might not be enforced.

In fact, the high unemployment in all of these countries seems to be due to other de-stabilizing factors that have nothing to do with the minimum wage. For instance, the state department has this to say about Liberia: “Due to the country’s continued severe economic problems, most citizens were forced to accept any work they could find regardless of wages or working conditions.”

The blue dots show the bottom 20 countries for relative minimum wage. The unemployment in these countries averaged 7.8%. Side note: I was a bit surprised to find Russia among the bottom 20 nations. Furthermore, I was scratching my head to see that Russia gets foreign aid ($983 million, about 1/2 coming from the US).

Take away? Numbers and charts don’t always tell the story!