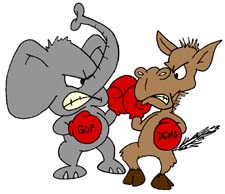 I was chatting with my Dad recently and he brought up a debate he’d heard on the radio between a Republican and Democratic candidate.

The Republican candidate said that in our present-day recession economy, Republican states were better off than Democratic states. My Dad seemed to particularly relish how the Democratic candidate scrambled to defend his party but didn’t contradict anything the Republican guy was saying.

Politicians are known for saying anything to win elections. Is it really true that Republicans manage the economies of their states better?

I found a treasure trove of state political data on Wikipedia. I also found information on unemployment for the month of February 2011 at the website for the US Bureau for Labor Statistics. And finally, I was able to get an estimate of the budget gap/head via The Center on Budget and Policy Priorities.

And so I put everything together into a spreadsheet and stared at the data.

One assumption I’d always had (thanks to the New Deal era of President FDR) was that government spending was the best way to keep the country afloat during a recession. My data allowed me to plot unemployment vs. the state budget gap per person. Each dot in the graph below represents a state. The data is obviously very noisy, but there appeared to be a correlation between higher state budget gaps and greater unemployment. You could fit a line to this data, but the correlation was weak (only ~0.24). 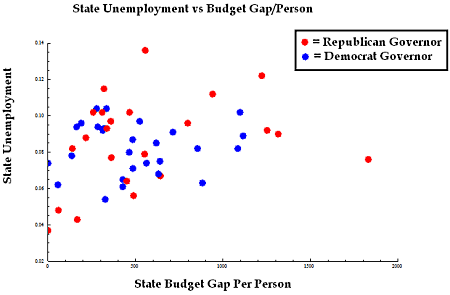 The colors of the dots in this graph also show whether the state governor was a Republican or Democrat (if the governor’s party changed because of the November 2010 election, I went with the previous governor).

One might also conclude from this graph that Republican governors ran up larger state budget gaps and had higher unemployment than Democratic governors.  Just for the record, the state on the extreme right is Alaska, home of Sarah Palin. The state with the highest unemployment is Nevada.

Not wishing to make conclusions too quickly, we can use another metric to decide how to categorize the “Republicaness” of a state — the ratio of Republicans and Democrats in the upper and lower state legislatures. 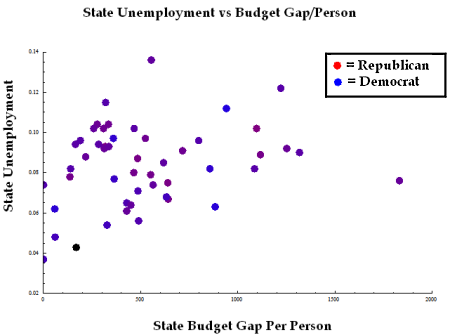 On the other hand, the upper legislatures in the states varied between majority Republican and Democrat. 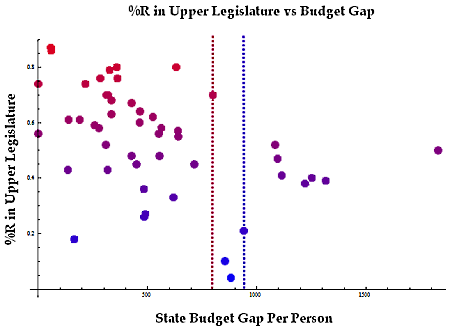 The colors of the dots in this image now reflect the ratio of Republicans vs. Democrats in the upper legislatures. I’ve added threshold lines showing the highest value of the budget gap associated with each party. Clearly, the Democratic legislatures had larger budget gaps, but only narrowly. What struck me as a stronger relationship here was that purple, or split states, actually had the highest budget gap/person.

In fact, if I rotate the figure and fit a Gaussian bounding the outer edges… 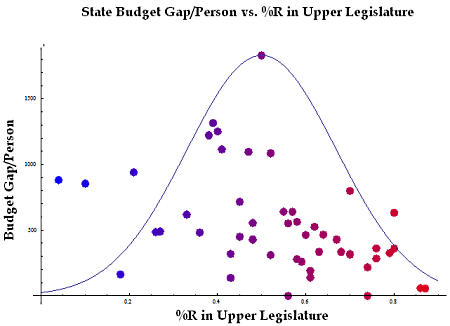 The higher the budget gap, the more mixed the legislature. Note that the reverse was not true: a more mixed legislature did not necessarily imply that the budget gap was larger. In fact, there were several purple states very close to and even on top of the $0/head mark. Perhaps a graph of the standard deviation would also be enlightening: 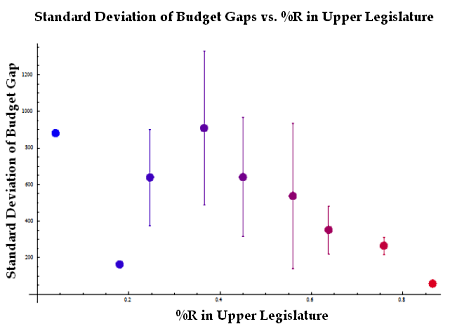 Is it obvious that the more homogeneous the legislature, the more fiscally responsible its actions? Democrats spend more, but also tax more. Republicans tax less, but also spend less. An even mixture of the two bodies can lead to the extremes of spending less and taxing more (the $0/head Montana) or spending more and taxing less (the $1830/head Alaska).

It seems clear that majority Republican states are not better-off than majority Democratic states. But… Both the Republican and Democratic candidates could have gotten away with claiming that their states were better off than (some of) the purple states!

For your enjoyment, I uploaded my spreadsheet of state Republican vs. Democrat data to this website’s wiki: Republican and Democratic Economic Data, Feb 2011.

Data extracted and combined from: