Time and tide wait for no one. Add to that: earthquakes. I live in the San Francisco Bay Area, a.k.a. “earthquake country”, in a house built in the 1950s before earthquake building codes had been created. Within the next 30 years, the USGS tells us we can expect a “big one” in the East Bay right along the fault where I dwell.

So here’s my question: If there’s a 30-year window for the next big one to occur, can I at least know the most likely time of day? This is not a crazy question. The time of day is really just a way of expressing where the sun is located with respect to your geographical location. The moon is responsible for sweeping the tides all around the Earth. So it seems reasonable to think that the moon or the sun may at least be an influence in “Earth tides” which might act as a trigger for earthquakes. Here’s a quick sketch showing my hypothesis: 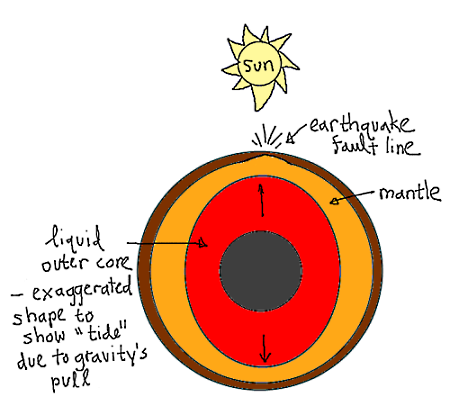 This question turned out to be fairly straight-forward to answer and I’ll cut to the chase and say, yes, there are some hours that are a teeny bit more earthquake prone than others, but the variations are small — certainly not enough to use as an indicator for running out the house.

I downloaded all earthquakes magnitude 5 or greater from 1973 through mid-2011 from the USGS Global Earthquake Search website. This gave me a list of 66,725 earthquakes — a reasonable sized dataset. I mapped the positions and color-coded magnitudes of all 66,725 earthquakes (green = mag 5.0 up through red = mag 9.1), shown at the top of this blog entry.

The next step was to calculate the right ascension of the sun and moon and translate the longitudinal position of each earthquake into right ascension to match. Below shows an illustration of what I’m describing. 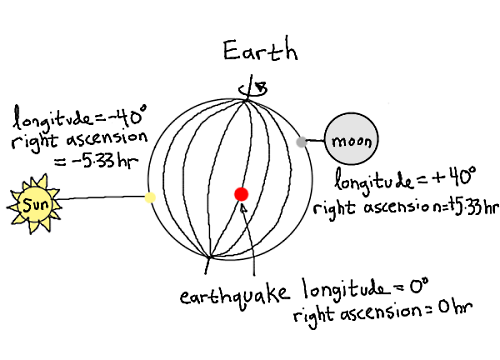 The important thing to note is that I am calculating the longitudinal difference of the sun and moon with respect solely to an earthquake’s longitude. This is because I’m wondering about the most earthquake-prone time of day so the longitudes are the relevant quantities rather than the latitude.

After these coordinates had been calculated for all 66,725 earthquakes, I found the difference of the position of the sun/moon with respect to each earthquake in terms of right ascension. Following that, I grouped the hourly offsets and graphed the resulting histogram.

Position of the Moon and Sun vs. Earthquake Time

Performing the above calculation resulted in the following histogram on the left. On the right I’ve depicted the histogram relative to an example earthquake point.

Of course there are noticeable variations. But are the variations significant?

To determine this, the last step was to generate a random simulation of earthquakes around the globe with which to compare the histograms in order to measure whether the fluctuations are expected or significant.

Once the random dataset was generated it was time to examine all sorts of different scenarios.

There’s also a decrease in earthquakes when the moon and sun are located together in the sky. Somehow, this seems to glue the faults together.

The most interesting find was that this result was independent of location on Earth. I hypothesize this is indicative of influence closer to the Earth’s core rather than near the crust where circumferential effects are more important. However, I’m not a geologist, so feedback from a professional would be really interesting.

The results were so interesting that I wrote them up into a paper which I’m attempting to publish. Since I’m not attached to a research institution (despite the name of my website) this has proved extremely challenging.  Still, I am hoping to upload the preprint to arxiv.org [update: The Association of the Moon and the Sun with Large Earthquakes was succesfully uploaded!] and have also submitted to PLoSONE.org which features open access publishing practices (although it is generally a biology-related online journal and has very limited geophysics content)

In short, there are times of which to be wary — watch out for the moon and sun on opposite horizons! But the increase was small enough that it would be fruitless to base any personal actions on them. Unfortunately, I’ll just have to settle for the USGS’s “sometime in the next 30 years”.